Health officials suggest that we’re on the verge of eradicating polio once and for all, joining smallpox and rinderpest on the list of diseases that have been consigned to history.

In education we’ve consigned our own evils to the dustbin of history.  Before 1870 it was mainly rich kids and religious kids who received a formal education.  The Education Act paved the way for public education for all.  More recently we’ve eradicated the evil of corporal punishment in schools.

Yet the scourge of classroom disruption continues to plague our schools.  A recent YouGov survey suggests that we lose 38 school days per year to poor behaviour, with one in five teachers admitting that they selectively ignore it.  A 2014 ATL study claimed that 40% of teachers have considered leaving the profession because of the poor behaviour of students.   In the same year an NASUWT survey concluded that 69% of teachers think that the problem of poor behaviour is widespread. 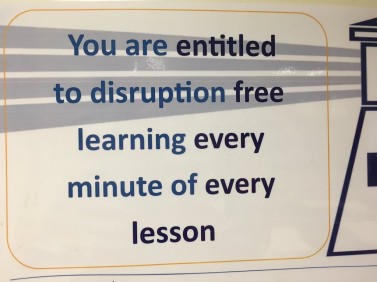 As a Teach First participant in 2003 I didn’t receive a huge amount of formal training, but much of what we did get was spent discussing how to get kids to behave.  One ruddy-cheeked chap I trained with, who I haven’t seen since, suggested that all we had to do was leave our desk and walk around the classroom every now and then.

But even if we weren’t explicitly discussing how to manage behaviour, we were mindful of the need to keep our kids engaged by using a range of activities, by making lessons relevant and by keeping our lessons pacy (lest kids should have time to remember that they’re in a classroom where they’re entitled to do whatever they want?).

Thirteen years on I worry that plenty of teachers still plan their lessons with a question in their heads of ‘will this keep the kids engaged?’ rather than ‘will this help them learn what they need to know?’  The former question leads to activities such as creating a Facebook page for Henry VIII, or writing a Twitter argument between a Montague and a Capulet, whereas the latter question might lead to proper analysis of Henry VIII’s manipulation of his image, or a structured response to Shakespeare’s use of imagery to reveal the discord between the warring families (‘where civil blood makes civil hands unclean’).

Classroom disruption appears to be a global menace, not just an English problem.  In Sweden, 38% of students reported that there is noise and disorder in most or every lesson (compared to the OECD average of 32%).  Research in the US suggests that poor kids particularly suffer from classroom disruption: ‘high-poverty cla

ssrooms have four times the concentrations of academic, attention, and behaviour problems as low-poverty classrooms’ (Our Kids, Robert Putnam).

Removing disruption from our classrooms allows our teachers to teach and our students to learn.  Earlier in the year a teacher at Swindon Academy told me that their behaviour system had ‘changed her life’ as it eliminated the daily stress that teachers face if they can’t be sure of calm, orderly classrooms.  Conversely, at a wedding this summer I met a teacher who left the state sector to work in a private school so that she could actually teach.

The good news about expunging disruptive behaviour is that we know how to do this:

Of course there’s a bit more to it.  We’ll need to explain to pupils and parents why we’re taking this approach; our withdrawal room will take a hit for the first week or two; a small proportion of kids will really struggle with the new expectations and will need additional support; our teachers might need reassurance that they can still fill their rooms with love and personality.  But none of these obstacles are insurmountable, and they are insignificant compared to the prize that awaits: a calm, orderly, purposeful learning environment in all of our classrooms, no matter which teacher stands before our kids.

In addition to leading to better academic outcomes, especially for poor kids who are more likely to experience poor behaviour, eliminating classroom disruption would do wonders for the recruitment, retention, workload and well-being of our teachers.  It might also help us win the grammar school debate.  When parents express a preference for grammar schools they’re often expressing a preference for schools with good behaviour and orderly classrooms; schools in which they feel their children will be safe.

There’s nothing stopping us creating these conditions in all of our schools.

The ‘disruption free lessons’ poster is from a school I work with in Sussex: Seahaven Academy.

For anyone interested in improving behaviour in schools, I recommend With All Due Respect by Ronald G Morrish.  If you want some more details about eliminating disruption from classrooms you could read my earlier blog HERE or contact me on twitter and I will send you some stuff.

5 thoughts on “The Scourge of Classroom Disruption”